"God and I Have an Understanding"

When I was with my first unit as a Chaplain, we were preparing for our deployment to Afghanistan. During our workups I had the opportunity to go out into the field to spend time and connect with the marines and sailors I would be deploying with. An interesting theme came up over and over again. It was often phrased “God and I have an understanding". What they meant was they believed they could not have a relationship with God right now because they were preparing to kill- which was contrary to what God would want. Since they were killing in their role as a marine, they figured God would have to understand and after all the dust settled they would be able to go back to God.

Does God Look the Other Way?

Those who tend to have a strong Christian faith are quick to reference Romans 13:1-7 and talk about the role of governing authority. I totally agree. The key is to remember that the average young marine may have never fully read their Bible and most who have a nominal faith are not well versed in the theology behind the Romans passage.

From a care perspective we see one of the unintended consequences of personalizing our faith. People lose the communal foundation and understanding of religious ideas. For the marine who had an “understanding” they had drawn a logical conclusion from a personal understanding of God and killing. This would potentially be reinforced at Church when the Pastor would talk about Jesus as the Prince of Peace. Words and phrases like "grace", "forgiveness", "turn the other cheek" and "unconditional love", would all support the idea that what they were doing was wrong. In combat, they show no grace and engage the enemy with full prejudice. Because everyone in the church would be supportive of them, they assumed God must look the other way while they do the “dirty work” of defending the nation.

As I was out in the field I met with a young person who had weaved together this interpretation, I was grateful for the opportunity to balance out the picture.

First, I would talk about Augustine and acknowledge the Church wrestled with this idea as it grew in numbers and prominence within the Roman Empire. It is a great reminder that our faith is lived out in community. We cannot take for granted what the individual members of our community understand.

Second, I would talk through the Just War Doctrine developed by Augustine and tie it into the Romans 13 passage. This allowed for a connection to teaching and theology.

Finally, I could talk about how they viewed their personal relationship with God. This was profoundly helpful for them because it brought a level of both clarity and peace to the burden they were carrying. It also brought ethics to the forefront of how they did their job. They could now see they had a responsibility to be honorable on the battlefield. God had granted authority to government in issues of war but as Augustine properly outlined with authority came responsibility and ultimately accountability to God for their actions. I would often talk to Marines about understanding there is time to pick up the rifle and a time to set it down. By having a proper understanding of their role, they could be more effective and balanced in the execution of their duties. 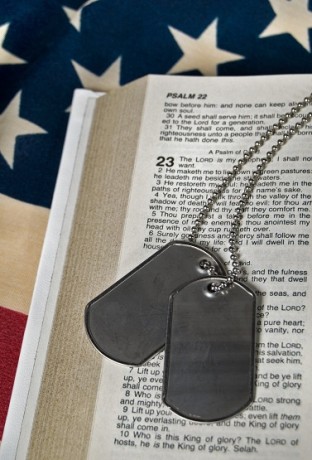 One time when I was on a range and talking to a group of marines, a young marine asked if they would go to hell for killing someone. The other marines perked up to see how I would respond. I held a little class and facilitated a healthy discussion. These are the discussions we need to have at multiple levels at church, home and out at ranges. When we talk about this, it sets the stage for the more personal one on one conversations. With a healthy perspective, we can deal with the real fears and concerns about killing and combat. We can establish a standard of serving with honor and having lines that will not be crossed. In those moments I felt I was part of helping a true warrior emerge who would fight for the right things at the right time. It was rewarding and a reminder that we must enable those we charge with carrying out the serious business of our nation with the proper perspective and enable them to grow spiritually as they faithfully execute their duties.

Chaplain Paul Armstrong
Paul Armstrong is currently serving as a U.S. Navy Chaplain. He earned his Masters of Divinity from Bethel Seminary and his MBA from Brenau University. He also served in the Navy as a Supply Corps Officer. In his combined naval service, he has deployed around the world on three different ships and has a combat deployment to Afghanistan. In addition, Paul served as the Senior Pastor for a Church and works with a wide range of not for profit organizations. He has the privilege of being married for over twenty two years. He and his wife have three boys. Chaplain Armstrong is still on active duty. All articles are written on his own behalf and the thoughts and opinions expressed are his and not necessarily those of the U.S. Government, Department of Defense, U.S. Navy or the Navy Chaplain Corps. Chaplain Armstrong will be writing from his religious tradition as a Protestant Christian.

No You Can’t Go Home

The Calling to Pastoral Counseling

Opportunities and Frustrations of Working as an Industrial Chaplain

The call of the industrial chaplain is perhaps a lesser-known chaplain’s role, but it’s one that has grown in recent years. According to reporting published The Atlantic, thousands of spiritual advisors work as industrial chaplains in the United States. Marketplace ministries (~2,800 chaplains) and Tyson Foods (~115 chaplains) are the some of the largest employers, but there are many other ministry Continue Reading